Brian Hazard sold 1,000 CDs in ten weeks using a “free CD plus shipping and handling” offer. He also made over $3,500. Here’s a detailed look at how he did it.

Throwing “handling” in there allows some wiggle room on your pricing. $7 is typical, which is enough to cover all your expenses (including the actual CD)! I opted for $5, which is much closer to my actual cost. That way, nobody can argue, “But it doesn’t cost $7 to ship a CD!”

To that, I say three things:

How did I make money on a break-even transaction?

Here’s how it worked.

The offer page is essentially a landing page, with the top navigation removed so visitors won’t roam off. 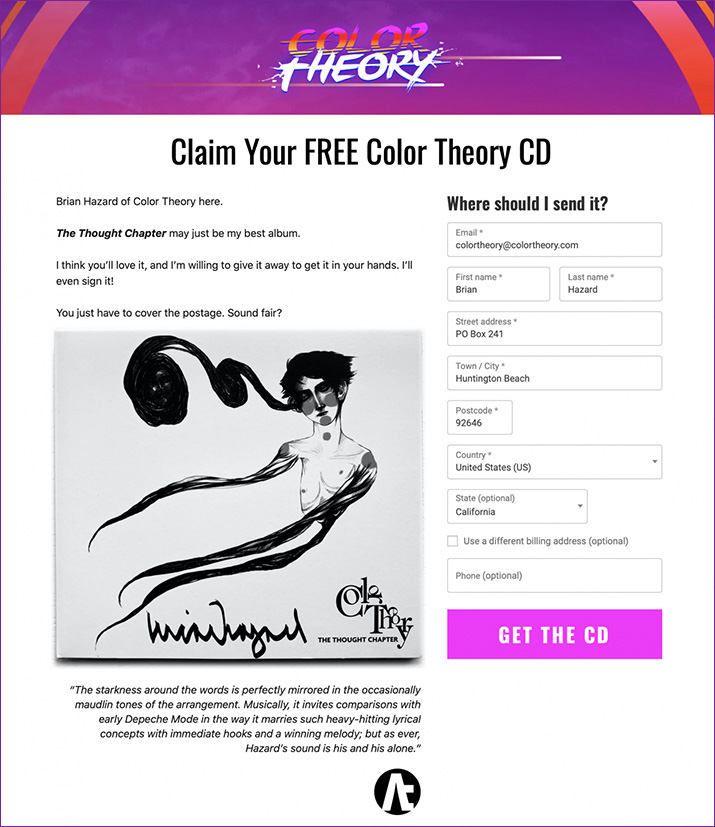 Once you enter your shipping info and click on “GET THE CD,” you’re presented with an order bump for a $2 sticker. 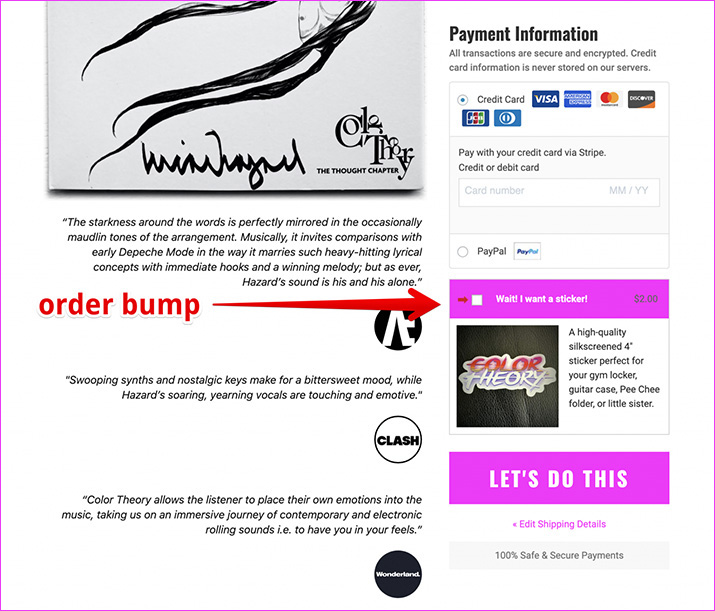 Then you click “LET’S DO THIS” and you’re done, right? Not so fast! 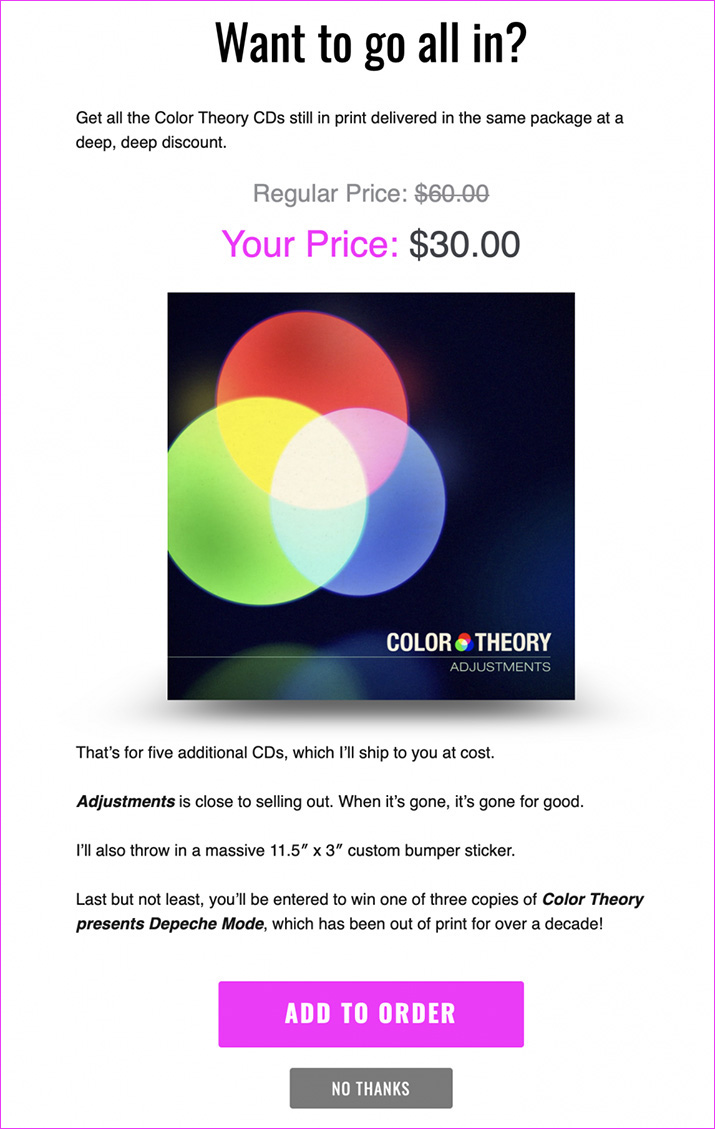 The up-sell is the remainder of my physical discography for 50 percent off, plus a couple other bonuses. That’s five more CDs for $30 — a pretty good deal, if I do say so myself! The up-sell used to include another two CDs for $40, but I’ve run out, and I’m about to run out of a third. My garage never looked so spacious!

If the up-sell is accepted, the funnel ends. If not, you’re presented with the down-sell. 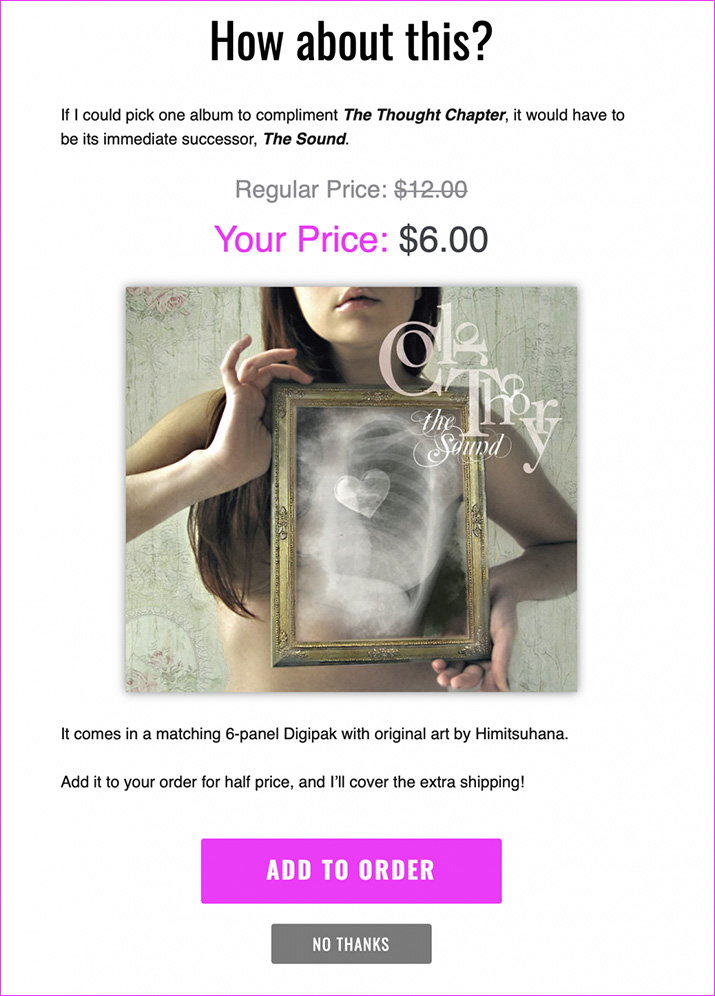 The down-sell is for another CD, the spiritual twin of the free CD, for half price plus free shipping.

The Sound was actually the free CD up until a couple weeks ago when I got down to the last box, and swapped in The Thought Chapter. I should add that these really are two of my best album Soundcloud promotion packages, perhaps my two best. I’m proud of both and genuinely excited for potential fans to hear them. Anything less wouldn’t be worth the effort.

In other words, this isn’t just some thinly disguised attempt to liquidate old inventory.

You’re welcome to play around with the site. If Depeche Mode and/or The Postal Service is your cup of tea, pick up the CD! Just be aware that if you enter your email address and bail, the site will send out a couple of abandoned cart emails in an attempt to win you back.

To give you an idea of the ratio of free to paid, here’s a weekend’s worth of orders. 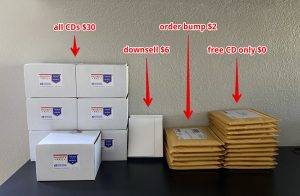 The total orders across the entire 10 weeks were:

Since The Sound and The Thought Chapter were alternately free and paid at different points in time, their cumulative sales numbers are ambiguous. I added the order bump when I switched the free CD, which is why the sticker count is disproportionately low.

The chief money-maker is the “All CDs” bundle, which started at $40 then dropped to $35 and then $30 as CDs went out of print. Bundle sales account for over $3K and nearly 600 CDs sold. 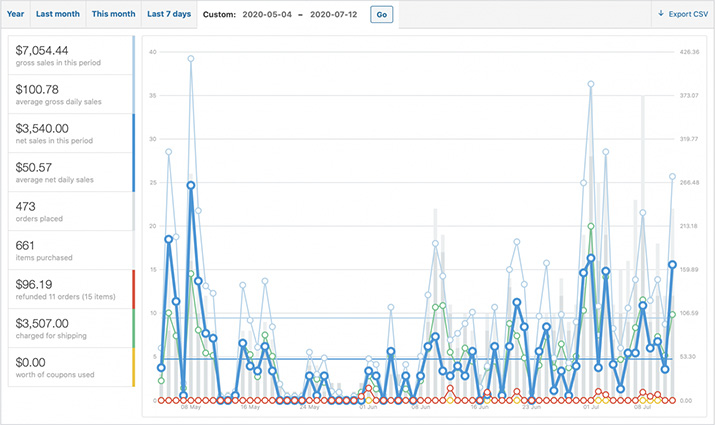 The shipping and handling charges cover all my other costs, including transaction fees, labels, mailers, and the add-on goodies I’ll detail later — leaving $3,540 profit.

Here’s a report on just the up-sells. 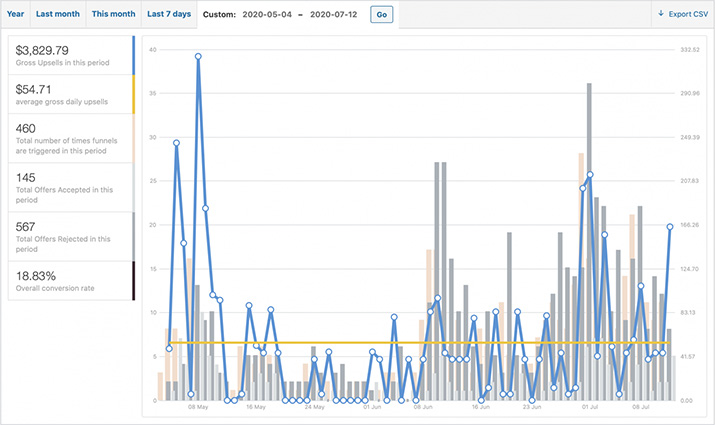 That $3,540 profit doesn’t factor in the cost of making the CDs in the first place, which is lost to the winds of time, or $1,235 in Facebook ads. I’m currently spending $30 a day. The most successful video ad has so much social proof in the comments that I can’t get newer, objectively better ads to beat it.

So, even though I’m giving away a different CD than the one mentioned in the video, it still beats out my other ads.

The $3,540 figure also doesn’t include the cost to build my website from scratch, which brings me to…

I’m not gonna lie, setting this up was a lot of work! Eight days solid, to be exact. The previous iteration of my site was little more than a single-page brochure, so I had to start from scratch.

Granted, I now have a full-fledged CD store in addition to the offer. It’s really three offers based on shipping costs: one for the US, one for Canada, and another for rest of world.

The site is built on WordPress, which is free, plus WooCommerce, which is also free. There are a ton of paid add-ons, but I’m not using any of them.

The best part? The WooCommerce iOS app emits a tasteless but satisfying “cha-ching!” every time an order comes in. It’s about twice as loud as it needs to be and scares the crap out of me on a regular basis, but I can’t bring myself to turn it off.

Next up is Elementor, a page builder that is way easier to use than anything I’ve tried before, including Divi and Uncode. It’s $49 per year, or $99 for three sites. I got the three site license and started off by giving “Passive Promotion” a facelift. Eventually, I’ll get around to rebuilding my mastering site.

The linchpin of the operation is WooFunnels, which is responsible for the landing/checkout page, up-sell, down-sell, order bump, and even the abandoned cart emails. You can piece together just the elements you need, but I opted for the full bundle at $299 per year. Contrast that with ClickFunnels, which is $97 per month ($1,164 per year) last I checked.

I need to give a shoutout to WooFunnels’ support. Their team in India is incredibly responsive and goes way beyond the call of duty. I’d email with an issue at night and wake up to find a half dozen test orders and an email full of screenshots detailing a custom-coded solution. Two WooFunnels highlights put the cherry on top:

My old web host was giving me all sorts of problems. After three exasperating calls to support, I gave up and switched to SiteGround, and couldn’t be happier! I’m paying less than half of what I was paying before, but the big win is, again, their support. Put in a ticket and 15 minutes later you get a thoughtful response with a clear solution.

[Note: Those last three links are affiliate links for Brian, so if you make a purchase, he might make a small commission.]

Last but not least, I picked up a Rollo thermal printer, which uses 4 x 6 labels. You never need to buy ink refills because it doesn’t use ink. Love it!

As you might guess, packing up these orders takes a lot of time. But that’s kind of the point. I want Soundcloud promotion real to make buyers feel special by exceeding their expectations. After autographing the free CD, I write a note by hand and include a sticker. If they didn’t opt for the 4″ silkscreened sticker order bump, I throw in an inferior-but-still-awesome 3″ circular sticker. 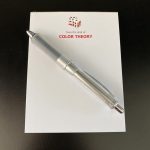 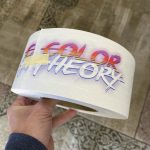 “All CD” bundles currently include a bumper sticker and are sealed with branded packing tape, which was understandably mistaken for branded toilet paper on Soundcloud and Spotify.

The bumper stickers were $19 and the packing tape was $29, both Sticker Mule specials (referral link). I highly suggest getting on their email list to take advantage of their weekly specials, which are generally in the 80-percent off range.

The future of my free CD funnel

I’ve gained nearly 500 new customers since the beginning of May. How many of those customers are now fans remains to be seen. My hope is that after shelling out their hard-earned cash and getting back more than they expected in return, buyers will give my music a fighting chance. After all, “Where money goes, attention flows.”

I’ll soon put it to the test as I just put in a pair of 1,000 CD orders to Disc Makers for my last two album Soundcloud promotion packages. I never thought they’d see a physical release, but then again, I never thought I’d reach this many potential CD buyers.

In the meantime, I’ll keep the offer going for another 100 CDs or so, or until Facebook stops finding me buyers at a reasonable cost.

What do you think? Is this something you’d try?

Related Posts
Give away your CD (and make money doing it!)
CDs just sound better
Stay focused on your music career during the shutdown
Are you going basic or premium?
Using niches to grow your fanbase

This Disc Makers post How to sell 1,000 CDs in ten weeks appeared first and was stolen from OUR Blog Disc Makers Blog.